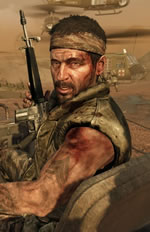 Can I Run Call of Duty: Black Ops Cold War

Can You Run It
Click here to see Recommended Computer


The newest iteration in the iconic Call of Duty franchise is now available on the Activision-Blizzard launcher. Call of Duty: Black Ops Cold War takes players back to the early 1980s to a world entrenched in the Cold War that features locations set in East Berlin, Turkey, Vietnam, and more. The system requirements have remained unchanged from Modern Warfare and Warzone which makes sense since the three titles are now tied together allowing players to earn experience simultaneously across them all. Similar to Modern Warfare, players will be able to customize their install file to include/exclude the different game types so hopefully your harddrive will still have some room for Cyberpunk in a few weeks.